Lavelle Waste Services has become the proud owner of a one-of-a-kind ‘super recycling truck’, kitted out with James Bond-style tech that could cut waste collection times, costs and carbon emissions in half.

Our small, family-run company is now the fastest-growing waste business in the North West as a result of their £250,000 investment in the custom-built vehicle, which is designed to collect two very different waste streams at once.

Craig Lavelle (Managing Director) originally came up with a vision for the specialised truck in 2016.  Craig Lavelle and our team wanted to create something fully sealed, aerodynamic, shorter and more efficient than other vehicles on the market, with the ability to collect glass and food waste at once.

Now, in 2021, the dream has become a reality, thanks to the engineering expertise of recycling vehicle manufacturers NTM-GB. 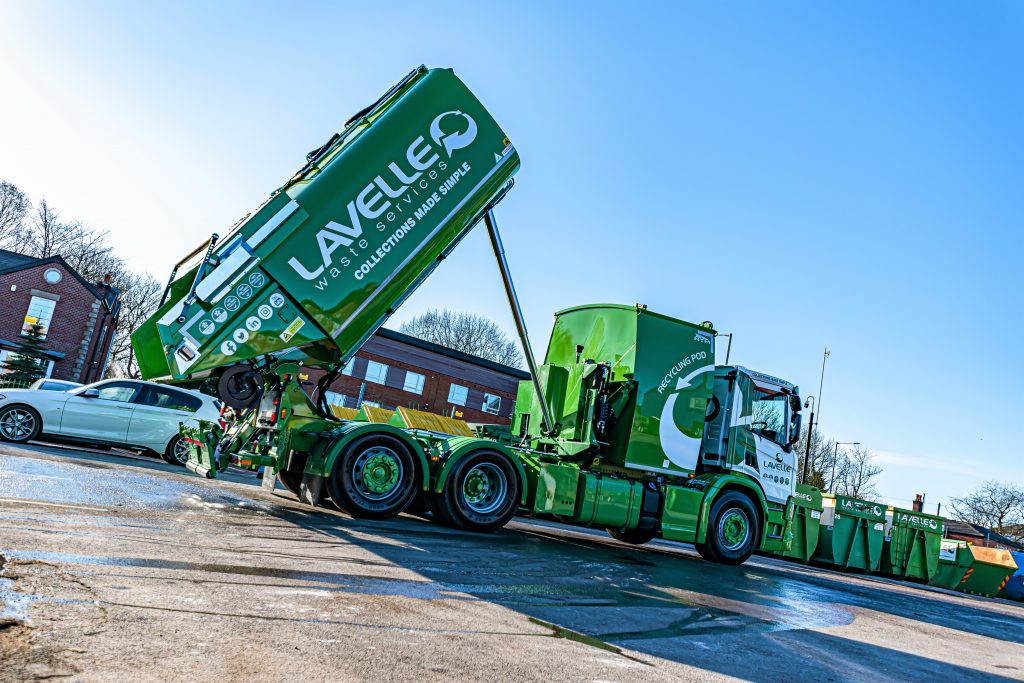 Martin Jones of NTM said: “Craig came to NTM-GB with specific requirements for a vehicle that had never been put together before – something capable of collecting two waste streams that are difficult to collect at the same time: food waste and glass.

“By having a vehicle collect both waste streams, Lavelle Waste Services wouldn’t have to send a second vehicle into the city of Manchester and the surrounding areas, thus saving on running costs and cutting CO2 emissions.”

Craig already knew what form the super recycling truck should take: “We knew we wanted to combine two existing NTM bodies, their side loader pod named FK, with their fully enclosed MAS body.

“We also knew that this combination would come with numerous benefits – but it had never been done before.” 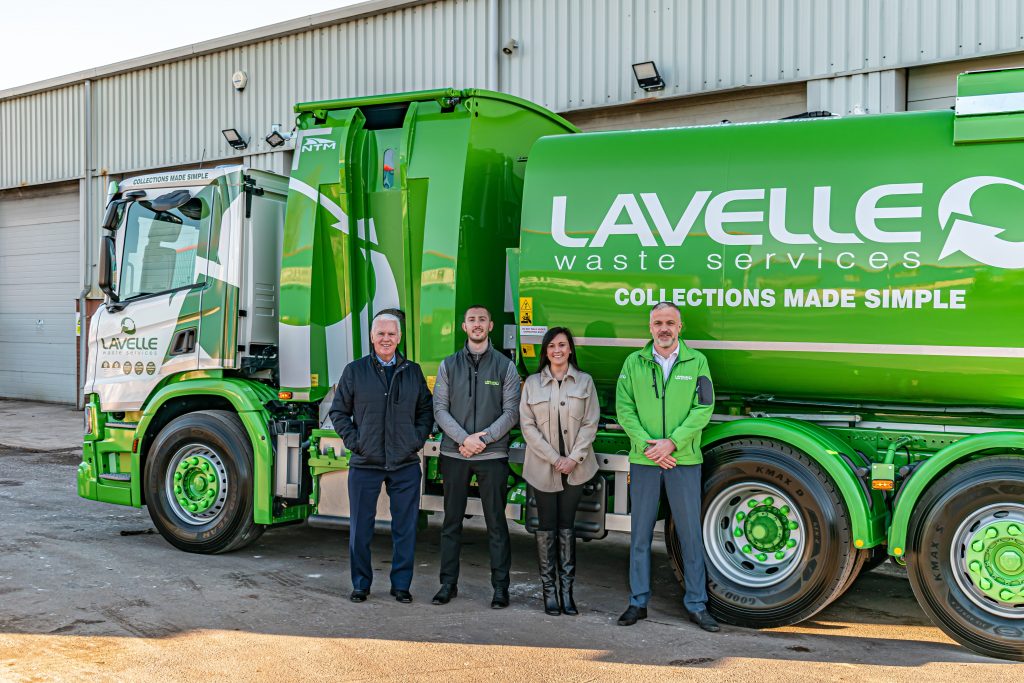 Armed with Lavelle’s idea, NTM’s engineering departments in Finland and the UK worked together to design and create the truck, pairing a MAS semi-compaction food waste body with a 6-cubic-metre FK Pod Unit on a single subframe to save space.

Every step of the design process was closely inspected by both Craig and Lavelle’s Fleet Manager Andy Tickle, who were at the forefront of all progress on the build and worked closely with NTM at each phase of the project.

The super recycling truck is now almost ready for use, with two completely separate compartments to remove any risk of cross contamination. Smaller, more agile and lower loading than other waste vehicles, the truck is easy to operate, keep clean and navigate around the tight rounds of Manchester and its surrounding towns.

With its unique design, the vehicle also allows Lavelle’s teams to work underground with low level ceilings, removing waste from the city’s shopping centres and transport hubs. And, because fewer trips are needed to collect different types of waste, the environmental impact will reduce.

Tricks of the trade!

Lavelle’s truck is not only a breakthrough in engineering, it’s also not short of gadgets that wouldn’t be out of place in a movie, such as a cutting edge weighing system developed especially for the vehicle.

Created by waste collections technology and software provider MOBA, the weighing system gathers data from each food waste and glass bin lift separately, so that Lavelle can accurately measure how much waste they are collecting and feed this back to their customers.

Along with some serious substance, the truck also has its own unique style.

“The MAS body and FK Pod unit mounted on to the Scania chassis looks special,” Martin from NTM said.

“The detail has followed through from the paint specification, even to the matching green mud wings. Every space has been thought out and boxes or containers have been fitted. I look forward to seeing the vehicle in its finished condition complete with decals in the Lavelle Waste Services livery.”

The truck’s arrival comes at a key time for the food waste industry, as the Government announces plans to roll out separate household food waste collections across the country as part of the Environment Bill.

Craig commented: “With a change in food waste legislation due to come into England in 2023, the demand for a food waste collection vehicle will be on the rise. We believe that with this investment, we are at the forefront of the battle against zero waste to landfill and rising food waste.”

With more than 40 years’ industry experience, Lavelle have developed an impressive reputation for using cutting edge technology to keep things simple, straightforward and efficient for customers, and the Bond bin truck is designed to do just that.

As Craig says: “Investing in the latest, most efficient and technologically advanced equipment on the market is our commitment to our customers across Greater Manchester.”